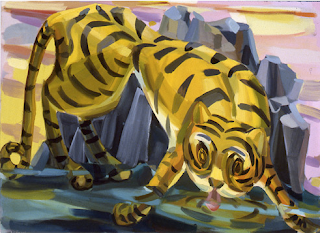 Who are the Super Ls? Two great painters: Judith Linhares and Mernet Larsen. They are both so good I posted once for each today, linked by the headers Part I and Part II. New York is lucky; they've both got shows up. Be sure to scroll down for Part II to enjoy the the full complement of Super L Painting.

Riptide, at Thorp Gallery (click on link above) is on right now, presenting Judith Linhares, long-term legendary painter. Judith's figures and animals shine bright amidst a universe of bottle greens and vivid lavenders, chicken wings and fir trees--sating their appetites with primordial satisfaction. This stellar show is eloquently reviewed by John Yau in this month's Brooklyn Rail; cut and paste this link: http://www.brooklynrail.org/2011/03/artseen/judith-linhares-riptide to read his thoughtful analysis on the work. Update: Riptide was reviewed in the New York Times and Village Voice. Another excellent review by painter David B. Brody can be found at Artcritical: http://artcritical.com/2011/03/23/judith-linhares/

It was terrifically hard to pick out which image to post here, as every one of Linhares' paintings offers a vision of life where pleasure and time coast in an excess of luxury, summarized by the juiciness of paint. I urge you to visit Thorp Gallery, 210 Eleventh Avenue, #601, and Judith's website for more (http://www.judithlinhares.com).

Here's a marshmellow roast from the past to send you on your way: 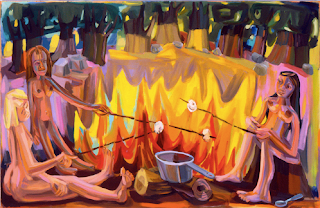 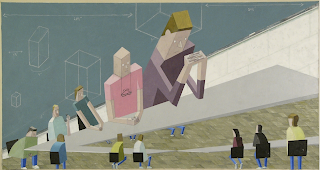 One of several excellent shows up now, Mernet Larsen and Jonathan Butt are deliciously paired by the alternative, artist-run space Regina Rex.  Butt's work is new to me (and good; materially related but not at all the same as Fabienne Lassere at Jeff Bailey). I've known Larsen's since 2003, thus she handily occupies the position of Super L (ref. post above). An unusual blend of Constructivism and Japanese painting, her compositions bend and twist space (and the figures within them) into new visual conundrums. Larsen is as engaging an intellect as she is a painter; I have been privileged to work with her in several capacities including co-curating Dragon Veins in 2006 for the University of South Florida's Contemporary Art Museum, a show that presented works by Frances Barth, Chie Fueki and Zhang Hongtu, among others.

This painting is one of my favorite Larsens. It lifts the airless immobility of a faculty meeting into meditative transcendence, a journey from a scroll.

There's much, much more at http://www.mernetlarsen.com. She also shows with Marcia Wood in Atlanta, and Mindy Solomon in St. Petersburg, FL. Update: this show is Pick of the Week at Artcritical, but I can no longer find it on the website to link! 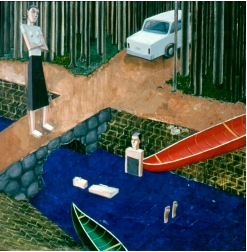 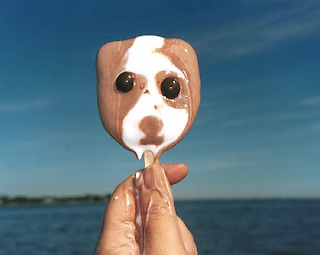 In addition to her artistic trajectory as a lively and esteemed photographer, Meredith documented artists for Williamsburg, Brooklyn's Waterfront Weekly in the late 1990s. I first met her and her beloved partner, filmmaker Carol Saft, at Cross Pollination, curated by MeryLyn McCorkle and Susan Joyce for the Holland Tunnel Gallery in 2000. Thereafter, we'd see each other at openings, brunches with mutual friends, and for the time Meredith photographed my work, an endearing clarification of priorities for both of us. Her photographs, from dripping ice cones to trashbags, domestic life or street rides, possess the unique ability to both expand and reflect upon collective memory.

Meredith's 2008 exhibition at Thorp, of discarded trash bags, was one of the best shows I've ever seen.

I last saw Meredith March 2nd at Lesley Heller's Daniel Wiener exhibition--in hindsight, a completion of sorts, though I did not know that then. She was, as usual, calm, good-natured and interested in everything around her; there was no sense she would so soon depart.  Weeks later, her absence does not feel natural. There is instead a commingling of shock, sorrow and desire--desire to to share what I hope are a multiplicity of images that surround her, to her infinite delight.

Ed Winkleman wrote a lovely tribute at  http://www.edwardwinkleman.com/ and links Art in America's tribute as well.

Dear Meredith, Rest in Peace.
Posted by ec at 9:21 AM No comments: 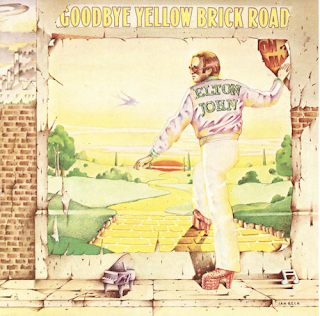 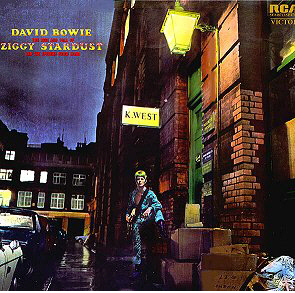 Los Angeles c. 1974. The shadows of trees flicker against shuttered windows as I perused the cover art of Ziggy Stardust, Aladdin Sane and It's Only Rock and Roll in my teenage bedroom. Sunlight made patterns on the wallpaper, suggesting peacefulness belied by the proliferating collage of rock stars in my closet.

Belgian artist Guy Peellaert's album covers, from Ziggy Stardust to Diamond Dogs, were the primary aesthetic fodder for my closet artwork.  Their ennui-soaked visuals brought the lyrics bemoaning the fractured lifestyle of touring expressed in Joni Mitchell's Free Man in Paris, CSNY's Pre-Road Downs and David Bowie's Space Oddity to life. The disorientation of such lyrics resonated with adolescent uncertainty and the cultural backdrop behind it: Vietnam War, Roe v. Wade, women in the workforce, Nixon's resignation, air travel, dissolution of the nuclear family. Before rock and roll touring morphed into commuting, the seedy glamor of "hotels and midnight coaches" still promised magic: I wanted to live in Peellaert's pictures.

Peellaert's images challenge art as an agent of discovery and connection, wherein material embeds meaning and invites prolonged engagement between viewer and process. In a digital world things move faster and are quicker to name and control, which Peellaert predicts in his mechanized scenarios. Rock star protagonists hover like the afterimages of the photographs and paintings they're copied from, grounded only by their sharp silhouettes. On Peellaert's official website (linked above) Michael Herr describes him as a "born icon painter in a world that uses up icons like paper plates." The quote applies to Peellaert's handling of space as well as figures. Brick walls, striped upholstery, cars and cakes enjoy identical treatment, as if simultaneously photographed, airbrushed and photocopied. Our eyes skip over surfaces unburdened by the weight of form; space unmoors as if Ian Beck's 1973 cover illustration of Goodbye, Yellow Brick Road, where Elton John steps into the fictional reality of a poster, had finally materialized.

But now Peellaert's fantastic worlds feel fresh again, backlit by digital culture. His grafted spatial transitions and airbrush-like surfaces presage the inky color, fast transitions and flattened space of painters like Peter Saul, Wendy White and Keltie Ferris, who run with a similarly hard, graphic aesthetic in various ways. Exchanging his groundless, iconic forms as gestures and his color and space for form points to other, equally new possibilities in painting.
Posted by ec at 11:02 AM No comments: