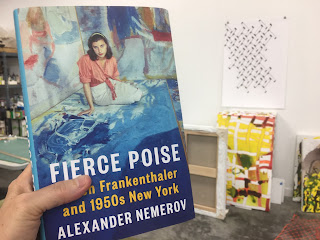 Frankenthaler was a student of Nemarov's father at Bennington; who in this book explores each year in a decade of her early life and work in New York.

A passage on page 80 reveals the insightful, confluent approach that makes this book an immersive read:

"She wondered what it all meant: "Is it that more abstract painting is impossible, that it's all been said or done, or that the next step would  only end 'painting' and turn it into decorated walls?" She felt let down by her peers.

Her alternative looked radically different. In Open Wall, a painting of that year, there is assuredly no direct correspondence with any Old Master. At more than ten feet across, painted on the floor, with raw blue, salmon, and ocher saturating the bare canvas, Open Wall is utterly remote from the paintings at the Prado. Comparing it, to say, Tintoretto's vast Christ Washing the Feet of the Disciples, one of the pictuees that Helen may have seen there, we can only recur to Greenberg's common-sense distinction between the old and the new art: paintings such as Tintoretto's show "a world whose depth, resonance, and plenitude are the product of illusion," whereas a modernist work "thrusts a sheet of pigment at you with an immediate force proper only to the realm of material sensation." But those sensations had a way of being more than arbitrary--of being, indeed, a record of Helen's experience, much as Joyce's Ulysses had been the raw document of a day. Just as Joyce had been--in Greenberg's estimation--"interested in the texture, feel, of experience, not in its content or meaning," Helen pursued an art of immediate impressions. And like Joyce she drew on precedents--in Joyce's case, Homer's Odyssey--to transform illusion and "meaning" into an art of sensation." 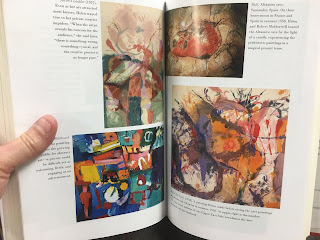 Frankenthaler's critical milieu interweaves this biography throughout in a delicious gestalt of 1950s Manhattan. As we learn of Frankenthaler's artistic development, cultural inspirations, and relationships, the influence of childhood in her work comes to the fore.

"The bursting power of Helen's paintings--specifically, the boldness and excitement of her color--perhaps also owes to the childhood sources of her art. Something in her pictures implies that color is a force, as if the painter must commit to it as a full-on saturation of the canvas, a power that all but dyes itself on the eye, as if it is to have reason for being there at all..."

And "... referred only to itself, to the capacity of color and shape to produce a feeling such as a child or teenager might experience: to a moment when the world just is, when it seems to float luminously independent of meaning and attitudes, free and clear of adult proprieties and judgments, when it is only a pulsation of feeling such as Technicolor teenage lovers feel staring into each other's eyes--when life is, in Helen's favorite word, a "'charge'".

A psychological note behind the weightlessness emerges in the account of the relationship with Motherwell, who discerns in Frankenthaler a "sad isolation" he shares. "As professional artists and lonely souls, she (Frankenthaler) and Bob carried their solitude with them wherever they went." Both artists deviate from wealthy, socially conformist families through the pursuit of art, yet maintain a distance above the fray, referred to by Herman Cherry when dubbing the pair "two gentlemen."

The snark continues about Frankenthaler's skeins of color, from Joan Mitchell's "Kotex painter" to Grace Hartigan's "painted between cocktails and dinner," in a time when painting was most often approached with urgency. Such comments undermine Frankenthaler's insouciant and trouble-free touch, which, from today's perspective, might be experienced as a mask for the emotional violence in privilege, a "leave your baggage at the door" ethic that either smothers or softens interaction, depending on perspective. A suspended dream space of escape relates to Henri Michaux, Pollock, and Chinese scrolls, where allusions and abbreviated summations prevail.

Toward the end of the book, Nemarov raises painting's transcendence:

"Another aspect of the bygone fifties ... was the feeling that art is a religion," in which "the art itself--in its capacity to deliver us into transcendent states--was itself a religion."
Reminding us painting has the capacity to transcend the maker.

I always liked her paintings because they were more interesting with multiple shapes that almost constructed a narrative. Most of the ab ex paintings of the time were more minimalist but did not hold my interest because of their simplicity. her paintings remind me of yours in several ways