Email ThisBlogThis!Share to TwitterShare to FacebookShare to Pinterest
Posted by ec at 4:15 PM No comments:

Email ThisBlogThis!Share to TwitterShare to FacebookShare to Pinterest
Posted by ec at 4:13 PM No comments:

Notes on my work - from a 2007 Fulbright application

My interest in Chinese painting began with frequent travel. Travel re-shapes my perceptions of space through movement and speed. When traveling, one view streams into another, without coalescing. Space becomes an interstice between recent and future moments. This visual phenomena impacts my experience of place, so that Florida’s exaggerated foliage and raking light catapults me to 1960s Los Angeles and 2004 Taichung, fusing multiple locations and times within one location. The question becomes, how to paint these sensations of space? Traditional Chinese landscape provides a visual framework and response to this question. The time lapses and experiential nature of Chinese painting has become the greatest inspiration for my work.

Huang Gongwang’s Dwelling in the Fu’Ch’un Mountains(1347-50) and Hiroshige’s travel through Edo Japan produced epic visual narratives of traveling landscape that inspire me to modernize their endeavors in a global world.

The Yuan Dynasty encapsulates my aesthetic model for landscape painting and presents a profound response to political duress. Under foreign Mongol rule, Yuan Dynasty artists faced the choice to remain in the capital or retreat to the mountains. Artists such as Huang Gongwang redefined pictorial space by combining near and distant views and textural brushwork to portray sensations of moving through space. These techniques compel my desire to portray movement in a contemporary visual context. Furthermore, the Yuan Dynasty model of painter-wanderer offers an artistic alternative to contemporary Western production. Painting and wandering conjures theorist Francois Jullien’s equation of blandness with possibility. In my work, spontaneous pours of paint and gestures transmit notions of possibility into the process of painting itself.

Painting’s ability to integrate multiple frameworks is one of its most vital characteristics. I want to deepen my cultural and technical understanding of Chinese painting regarding scale, texture, value, composition and ch’i (energy). This is important because in Western cultures, Chinese painting is often understood through Abstract Expressionism. While Kline, Guston, deKooning and other painters of the 1940s and ‘50s consulted Literati and Zen practices of reflexivity, intuition and subjective interpretation through painting, the notion of painting as necessary preparation for the release of ch’i (energy), has no correlate in the United States. To paint an image repeatedly, memorizing it bodily so it is released rather than constructed, will align my painting more closely with the true visual and philosophical underpinnings of Chinese tradition. In this way, my work will adapt its cultural idioms with depth and accuracy. Through this process I will raise important issues of critical measure by weighing the intangible presence expressed through “ch’i” against aesthetic and post-formal critique, which pertains in the visual arts for obvious reasons.

I find the traditional Chinese conception of landscape as an arrangement of predetermined elements an irresistible model for the 21st century! Merging cartoons, Art Nouveau and illustration with Chinese idioms accurately reflects the culturally layered landscape through which I move, and paint.
Posted by ec at 11:32 AM 1 comment: 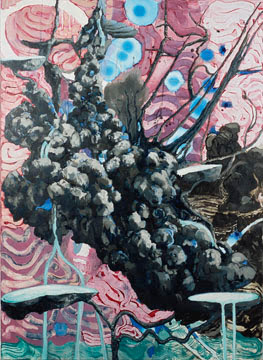 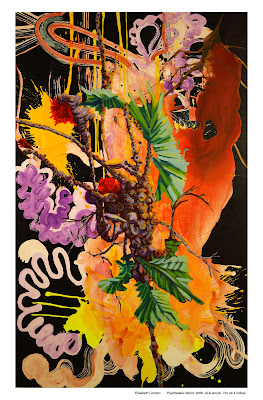