On View at the Kunstmuseum Bonn: David Reed, Heart of Glass


David Reed, painter and spokesman for all that painting can be, has a major retrospective at the Kunstmuseum Bonn. Visit the link below for a wonderful interview with Reed, from which many of the captions were taken. Reed's work, scholarship and (in his words) humanity, offers hope for painting's continued aesthetic and critical role and vitality, as is evidenced in these images. Check out the top painting, so close to Monet's late panel paintings at L'Orangerie and Marmatton Monet, though Reed loves the Italian Baroque.

Link to David Rhode's review of Reed's Heart of Glass at artcritical
Posted by ec at 5:34 PM No comments:

It has been a while since I've spent time with painter Susanna Coffey, whom I've known since 1987. I visited her ex-schoolroom studio on a rainy Wednesday after her work had been photographed for an upcoming show at Alpha. Above, links to her Alpha Gallery artist page and personal website; below, images from her studio that form a preview of the show.

The paintings have changed radically, while retaining salient characteristics such as cropped portrait size, a large scale seen from close-to, subtle, but exciting color transitions and a "knit-painting" mark that is a cross between a horizontal dab and flick of the brush. The paintings are on cradled panel, but the overall effect of their facture is a soft density, built layer upon layer to achieve a rich earthiness.

In a talk at the Studio School some years ago, Susanna mentioned African masks and the way, after long bouts of painting, how self-portraiture 'disappears' within a larger construct. It was as if there comes a point when subject matter and content becomes secondary to the process of painting itself: direct communication with less attachment to means. At least this is how these new paintings seem; they are both portraits and not; we admire the paint, guffaw at exaggerated features and fall quiet before the prospect of a surface that contains both form and emptiness, and we move through these changes without effort.

A 2011 self portrait, a year in the making, might be the pivot for the turning away from the self-portraiture that occupied Coffey's work for the better part of a decade. Her renegotiation of terms includes landscape as a version of dissolved or dissolving form, a fusion to which monotypes from as far back as the 1990s begin to point. The vacillation between form and ground seems solid sometimes and other times, ephemeral. We look, and in the process become aware of the pleasure and mechanics of seeing. This fulfills the promise of the mask Coffey showed years ago, that magnifies awareness of how embodied experience resonates in the object, be it sculpture or painting. 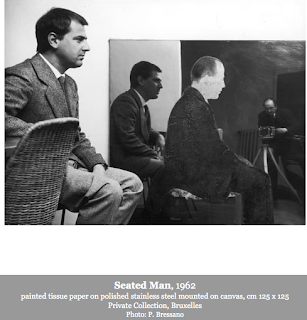 "The mirror paintings are the foundation of Pistoletto’s oeuvre—both of the artworks he makes and of his theoretical reflection in which he constantly returns to them to study their meaning in depth and to develop their implications. The essential characteristics the artist identifies in them, are: the dimension of time (not just represented, but presented in reality); the inclusion in the work of the viewer and his/her surroundings (which make “the self-portrait of the world”); the joining of couples of opposite polarity (static/dynamic, surface/depth, absolute/relative, etc.), constituted and activated by the interaction between the photographic image and what goes on in the virtual space generated by the reflecting surface; the placement of the mirror paintings no longer at window height, as paintings are traditionally hung, but on the floor (which creates a passage through which the space in which they are shown continues in the virtual space of the work, a door that opens between art and life).

The mirror paintings were first exhibited in Pistoletto’s one-person show at Galatea in April 1963. A few days after the opening Pistoletto went to Paris, where he met the American dealer Ileana Sonnabend, who later bought the entire show and took over Pistoletto’s contract with Galatea.

“I realized there wasn’t any sort of assent or interest around me: in fact there was a certain nervousness and rejection, mainly by the gallery owner himself. So I took a trip to Paris. There I met Beppe Romagnoni who told me about a gallery where strange and interesting paintings were being shown. So I dropped by the Sonnabend Gallery and asked to see these paintings. In this way I first saw Rauschenberg, Jasper Johns, Rosenquist and Lichtenstein’s paintings, and Segal and Chamberlain’s sculptures. They asked me if I was a critic and I said, no, I’m an artist. When asked what I did, I showed them the Galatea catalogue and a painting. They were struck by the work and came to Turin where they bought up the whole Galatea show. They took over the contract with Tazzoli and a situation developed that was extremely important for me: from my isolation in Turin, I was catapulted into an international dimension” (Michelangelo Pistoletto, interview with Germano Celant, cit., 26-29).

The mirror paintings quickly brought Pistoletto international acknowledgement and success, which in turn led to numerous one-person shows in Europe and in the United States (Paris, 1964; Brussels and Minneapolis, 1966; New York, 1967 and 1969; Rotterdam, 1969)."

In Los Angeles, as an art student at UCLA, I saw Pistoletto's show at LAICA's South Robertson location (see history below). His website, linked above, states the show consisted of a different body of work, the Minus Objects, but I remember mirror paintings with a gold cast and screenprinted images. They are totally relevant to the work I'm making now; amazing how memory serves.

"The Los Angeles Institute of Contemporary Art was formed between 1973-1974 to provide a permanent exhibition venue for the visual contemporary arts in the Los Angeles area. The founding principle was to establish an arts organization that operated democratically and spoke with a multiplicity of voices. In order to remain flexible and minimize operating expense, LAICA did not establish a permanent collection.
Members of the Board of Directors included Peter Alexander, John Baldessari, Rosamund Felsen, Peter Plagens, Judy Spence, and other artists, gallery owners, and members of the art community. Committees that supervised exhibition programming and LAICA's published Journal were elected by members, and the duties of exhibition curator and periodical editor rotated among members, rather than being the responsibility of permanent staff. A registry of slides and biographical materials, begun in 1971, was open to submission by any Southern California artist. LAICA's first exhibitions were held in the fall of 1974, under founding director Robert Smith, a former curator at the Brand Library and Art Center in Glendale, California. The first issue of Journal was published in June of the same year.
LAICA's first exhibition space consisted of 4,200 square feet on the fifth floor of the Century City complex. During the mid-1970s, the organization hosted numerous exhibitions and events - all were were well attended, despite the lack of parking and restrooms. Exhibitions focused on a wide variety of contemporary painting, sculpture, decorative arts, fashion, performance art, video, music, architecture, social issues, and public art. Exhibitions were curated by both LAICA staff and guest curators, including Walter Hopps. Desiring to expand their space, LAICA had hopes of Frank Gehry redesigning the Century City space. The institute, however, was forced to relocate after losing their lease.
In March of 1977, LAICA reopened in an 8,000 square foot facility on 2020 South Robertson Boulevard. In addition to their public programming, the organization created an Artist-in-Residence program with funding made available by the Comprehensive Employment Training Act (CETA). By the end of the 1970s, LAICA was flourishing with increased budget and staff, and, by 1980, opened a second exhibition space at 815 Traction Avenue, referred to as the "Downtown Gallery." An additional storefront exhibition space in the Eastern Columbia building was donated by State Senator Alan Sieroty.
A decrease in public funding in the early 1980s forced LAICA to cut some of its public programs. The organization, however, still staged ambitious exhibitions, including one of contemporary Italian art that traveled to nine different venues, and a show of nine contemporary Australian artists in connection with the 1984 Olympics Art Festival.
Robert Smith resigned from his position as director in early 1985. Ben Marks, the former director of the Center of Contemporary Art in Seattle, was hired that summer. By March of 1986, however, Marks had resigned and the Board of Directors decided to sell LAICA's South Robertson location. Faced with financial burdens and the lack of a permanent exhibition space, LAICA staged exhibits at temporary spaces around Los Angeles. The Los Angeles Institute of Contemporary Art officially closed in 1987 after thirteen years of operation."
Posted by ec at 6:15 PM No comments: