Flower (Re) Power Curated by Terri C. Smith at the Housatonic Museum of Art, Bridgeport, CT 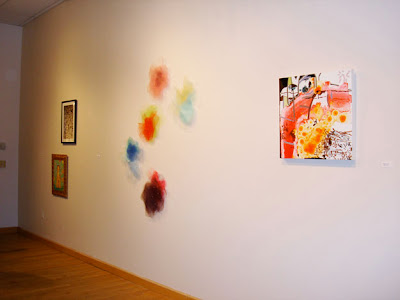 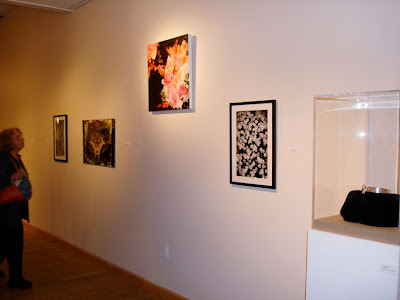 For more images, click on link and select photos from the exhibition's blog menu.
Posted by ec at 3:46 PM No comments:

Musing on Painting: Field and Window

Jackie Saccoccio's exhbition at Eleven Rivington (press release linked above) expands the traditional 'window' of painting into three dimensions. Her large, tripartite painting and companion window drawing intersperse pockets of depth with flatness, amplifying the field-like space through which, starting with impressionism, we view abstraction.

At Saccoccio's opening it seemed impossible to discern the space created by the installation. My eyes hooked on details--plume-like pours of white, an area of purple peeking out through tangled glossy and matte blacks, a marking system of square-like shapes peeking out beneath a tumult of activity on top. Though the gallery press release explicitly states that the viewer becomes sandwiched, as it were, between the window drawing and three-panel painting, the scale kept it conceptual. The green-tinted window drawing collapsed street reflection and painting, merging multiple layers into a cacophony of visual and aural information that threatened to submerge any spatial discernment. I couldn't visually penetrate the holes in the green drawing's surface to descend into deeper space but remained perceptually between the window and room. In the press release, the neat encapsulation of Saccoccio's reproduced painting did not jibe with my experience of its internal scale, which augured an unexpected sense of flatness that took perception for a ride.

My eyes had encountered something unforeseen: a painting they did not understand. It was thrilling to feel so visually nonplussed in an age of image saturation that is so overtly legible. I returned to the gallery during regular hours to find the payoff that eluded a room full of people: painting about movement seen in passing, changing like light as one crisscrossed the empty gallery. Time and movement dictated ways the green tint on the window impacted and flattened the blacks, then in passing switched their depth; how the artist's signature square shapes blinked on and off as one traversed the painting surface, how divisions between canvases punctuated the flow of white transparencies slowly spreading over the painting's surface as if reflections or clouds: but decidedly NOT. Movement yielded stasis, fleetingly--before I, or the painting, uprooted again for another phase of space and perception. Image became dream: something experienced in memory, but never coalescing as solid form.

Resolutely flat then "opening the window," the painting becomes an experience of space both real and unreal, conjuring and dissolving the body simultaneously. The dimensional aspect literally layers perception while flat color flattens the layers, forming shifting fields before our eyes. Impressionist style, our eyes complete the work. But this is not impressionist painting; it is an aggregate of marks that (perhaps like Impressionism when new) demand to be assembled in new ways. Or--it is the world.

Saccoccio's work as well as that of Franklin Evans, whose piece at PS.1's Greater New York echoes her concern with dimensional abstraction (in his case, through the use of masking tape taken from his studio walls), inform my own interest in combining field and window. It comes as no surprise the artists collaborated on the gallery installation Blue Balls, first shown in SoHo and incarnated as Collision this fall at the RISD Museum. His work shares with hers the dimensional aspect; the dissemination of form in favor of layered impressions that coalesce into a greater whole.

My endeavor to collapse dimensions and flirt with the pictorial while resisting the takeover of literal form seems impossible: what would the logic of a painting be? How could... but multiple modes of seeing have become part of perceptual experience: can painting embrace it well perceptually, conceptually and materially? The work of these artists and Saccoccio's show re-invigorate the question.

check out Jackie's website: http://www.jackiesaccoccio.com
Posted by ec at 3:55 PM No comments:

This appraisal of my earlier work by Stephanie Lee Jackson (linked above) suggests the devolving role of form in my work.
Posted by ec at 3:20 PM 2 comments:

In Memorium: Louise Bourgeois and her Salon 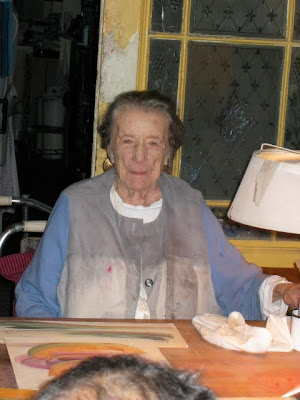 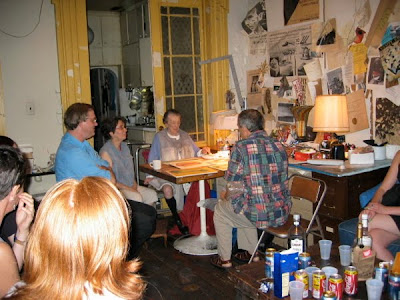 When artist Jo Darbyshire was here from Australia, she visited Louise Bourgeois' Sunday salon with Melissa Levin of Toronto, who photographed the event.

Like so much else Louise Bourgeois initiated, her Sunday afternoon salons will resonate for a long while to come.

I first went in 2002--can't even remember the year actually. Trembling, I called on a Monday. Allo? a tiny, but sharp voice answered and asked if I was an artist. What kind of work did I make? What imagery? Come at 3, she said, and hung up. I'd been advised to bring good whiskey or excellent chocolate; these offerings accumulated on a large wooden spool/table and were passed around the room.

Lugging a 48 inch tondo of a Raggedy Ann Madonna holding a baby doll, not cognizant that she reviewed art on a 2 x 2 table, I ascended a rickety stairway to the room pictured above. It was packed with artists, curators, poets and singers holding sketchbooks, architectural plans and photographs. Louise Bourgeois sat behind the table and received every one, assisted by an art world friend who served as a facilitator. The process lasted seven hours. People began to drink whiskey and eat chocolate to keep going. When details caught Bourgeois' eye she'd ask pointed questions very directly. She interrogated a man who'd attached a rock to the middle of his painting, dismissing the desire to provoke without a broader intention (how I remember her viewing the work). That night, as people filtered out, she drew a perfect circle with a blue ballpoint pen on a sheet of sketch paper. You could feel her moving into the experience of making, fueled by the conversation and looking at work.

Two years later, the immediacy of her presence remained intact, though by this time procedures were more organized. The film camera rolled, the facilitator kept things moving. The room itself served as a lively protagonist, with curled and peeling articles and invitations from decades past festooning the walls. Its enclosure provided a space for artists to experience themselves in the greater sense as a tribe, a vital component in civilized life that was and would continue to be passed along through generations. No doubt this is attributable to Bourgeois' unflagging devotion to intuition, memory and experience as crucial to making art. The sense of lineage that crystallizes when artists share their work attests to art's power and constitutes the legacy of her salon.

Thank you, Louise Bourgeois.
Posted by ec at 7:03 AM No comments: