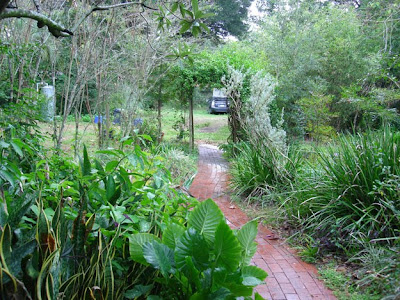 Paint is embodied. That is part of its importance.
Posted by ec at 11:59 AM No comments:

Wei took the picture of Xiao and I in the post below this. Xiao's son, whom I got to know well, is called "humanity" in Chinese. I could not understand the word, sadly...and so called him wo de xiao peigno (pidgin is off)-- my little friend.

They live in the village next to mine in Songzhuang, as they have for 9 years. Wei paints, Xiao is a mastermind organizer and coordinator. Formerly a soldier in the army, she met Wei and now lives the art life--facilitating, translating, planning, orchestrating.

We met in 2005 at Red Gate. Xiao arranged for Wei and a friend to take me to the Great Wall on a freezing December day. They picked me up early; we ate dried grape fruit on the way. Delicious. The three guys wore green Mao coats with fur lining that were very warm. Once we reached our destination, about two hours north of Beijing, we crossed a footbridge and paid a few yuan to a local family before heading to an old, crumbling part of the wall. We were the only ones on it that day. Mountains rose and fell around us; shadows moved across them as the sun shifted over the sky. After several hours of hiking, we returned to the family's home, where they made us a warm meal. A photograph of Mao was on the table.

Afterward Wei, his friend and Xiao drove me to a Buddhist temple, with expansive grounds. They told me to go in alone. I entered a passage lined with bamboo. Moving over the grounds, I saw enormous Buddhas, an 8,000 year old tree spread over a lattice and another extremely high mountain with a criss-crossing path. I sighed. How could I not climb it, though my feet were frozen solid and my legs sore from the Wall? And as I climbed, and climbed, I reached the top, where Beijing spread out before me, a flat field illuminated by a gold sun in the distance. As I descended the second major climb that day, I heard bamboo soughing in the wind. The van with Xiao, Wei and their friend idled in the parking lot outside.

I was transformed. I had seen scrolls from my own perspective, the journey they represent over a duration of time and moving through a place.

Wei loves Yuan Dynasty painters and has a copy of Huang Gongwang's landscape book. He is a classic Buddhist Chinese scholar, adept at painting, calligraphy and also serving tea. Four years later after the Great Wall, when the picture below was taken, he was sharing his books on the great Chinese painters. Later, we shared philosophers--he did not know Francois Chen, but told me about Red Pine and others working in the United States. I continue to learn a lot from Wei Baogong and Xiao Yau.
Posted by ec at 8:47 PM No comments: 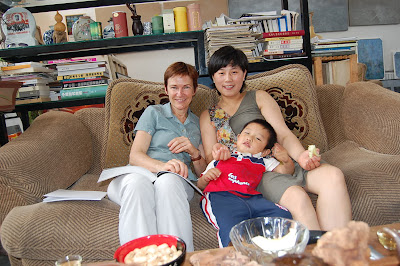