There are many others in the show: Paul D'Agostino, Catherine Howe, Stephen Westfall, Riad Miah. This blog has good images from the show:
http://romanblog2.blogspot.com/2013/05/group-abstraction-show-national-arts.html
And the above blog, plus links to some of the artists, can be found on Painter's Table:
Painter's Table


Raggedy Ann's Foot will take a summer vacation. Happy Summer, everyone!
Posted by ec at 2:19 PM No comments:

Out and About on the LES 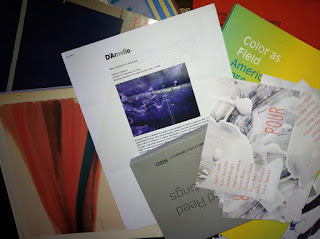 Michelangelo knew that the meaning of the Greek humanities for his time involved making Christ-the man, into Christ-who is God; that his plastic problem was neither the mediaeval one, to make a cathedral, nor the Greek one, to make a man like a god, but to make a cathedral out of man. In doing so he set a standard for sublimity that the painting of his time could not reach. Instead, painting continued on its merry quest for a voluptuous art until in modern times, the Impressionists, disgusted with its inadequacy, began the movement to destroy the established rhetoric of beauty by the Impressionist insistence on a surface of ugly strokes.


The impulse of modern art was this desire to destroy beauty. However, in discarding Renaissance notions of beauty, and without an adequate substitute for a sublime message, the Impressionists were compelled to preoccupy themselves, in their struggle, with the cultural values of their plastic history so that instead of evoking a new way of experiencing life they were able only to make a transfer of values. By glorifying their own way of living, they were caught in the problem of what is really beautiful and could only make a restatement of their position on the general question of beauty; just as later the Cubists, by their Dada gestures of substituting a sheet of newspaper and sandpaper for both the velvet surfaces of the Renaissance and the Impressionists, made a similar transfer of values instead of creating a new vision, and succeeded only in elevating the sheet of paper. So strong is the grip of the rhetoric of exaltation as an attitude in the large context of the European culture pattern that the elements of sublimity in the revolution we know as modern art, exist in its effort and energy to escape the pattern rather than in the realization of a new experience. Picasso's effort may be sublime but there is no doubt that his work is a preoccupation with the question of what is the nature of beauty. Even Mondrian, in his attempt to destroy the Renaissance picture by his insistence on pure subject matter, succeeded only in raising the white plane and the right angle into a realm of sublimity, where the sublime paradoxically becomes an absolute of perfect sensations. The geometry (perfection) swallowed up his metaphysics (his exaltation).

The failure of European art to achieve the sublime is due to this blind desire to exist inside the reality of sensation (the object world, whether distorted or pure) and to build an art within the framework of pure plasticity (the Greek ideal of beauty, whether that plasticity be a romantic active surface, or a classic stable one). In other words, modern art, caught without a sublime content, was incapable of creating a new sublime image, and unable to move away from the Renaissance imagery of figures and objects except by distortion or by denying it completely for an empty world of geometric formalisms—a pure rhetoric of abstract mathematical relationships, became enmeshed in a struggle over the nature of beauty; whether beauty was in nature or could be found without nature.
I believe that here in America, some of us, free from the weight of European culture, are finding the answer, by completely denying that art has any concern with the problem of beauty and where to find it. The question that now arises is how, if we are living in a time without a legend or mythos that can be called sublime, if we refuse to admit any exaltation in pure relations, if we refuse to live in the abstract, how can we be creating a sublime art?
We are reasserting man's natural desire for the exalted, for a concern with our relationship to the absolute emotions. We do not need the obsolete props of an outmoded and antiquated legend. We are creating images whose reality is self-evident and which are devoid of the props and crutches that evoke associations with outmoded images, both sublime and beautiful. We are freeing ourselves of the impediments of memory, association, nostalgia, legend, myth, or what have you, that have been the devices of Western European painting. Instead of making cathedrals out of Christ, man, or "life," we are making it out of ourselves, out of our own feelings. The image we produce is the self-evident one of revelation, real and concrete, that can be understood by anyone who will look at it without the nostalgic glasses of history.