A talk by Professor Michael Taussig (Dept. of Anthropology, Columbia University) who is one of the most innovative, distinguished and socially engaged voices in cultural anthropology. An interdisciplinary thinker and engaging writer, Taussig's work combines aspects of ethnography, story-telling, and social theory. An area of long standing interest, Taussig will be discussing aspects of Latin American ayahuasca-based shamanism and its historical interface with Western magic.

In 2007, visual artists Jesse Bransford and Karsten Krejcarek spent time in the city of Iquitos, Peru and the surrounding jungle. In a public conversation they hope to further elaborate on the experiences in relation to their art and art making in general. Topics will include globalization, adventure narratives, monkeys and telepathy.

Bransford and Krecjarek went first, describing their embodied experience of the jungle through the filter of ayahuasca, with a vibrant slide show behind them illuminating their trip and resulting exhibition of Bransford's work in the gallery. After them, Taussig, whose book What Color is the Sacred constitutes, for me, one of the first written accounts of pure visual experience, did not disappoint. He lectured for one hour straight, responding to the two artists' points with barely a reference to notes. He also played recordings of Amazonian rituals, amplifying and vivifying their accounts with his own. The experience as a whole embraced multi-valent, experiential intelligence that broadens rather than contracts horizons. My people!

Bransford mentioned Latin American modernism as possessing qualities that relate to his experiences in Peru, but did not link its purely visual language with unfiltered, drug-induced experience. When I mentioned this to his friend in the audience, he noted the colonial aspect of modernism under discussion problematized such notions. Taussig offered a way out, stating that images diagnose a situation and by visualizing it, change it.

When I think of multiple identities, experienced in the above travels as well as daily life, I do not see how pictorial logic can remain coherent and remain visually relevant to experience. Yesterday's talk confirmed this. "The magic of otherness" might lure, initially, but once dispelled in a direct encounter, complicates and expands comprehension, perceptually and conceptually. It may become part of us, and us a part of it, but what this actually looks like cannot already have been imagined.
Posted by ec at 4:18 PM 2 comments: 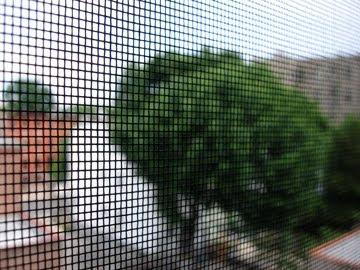 I am here.
Outside my window, the tree is now bending with the wind and is a dry, but very deep green.
Posted by ec at 7:23 PM No comments: