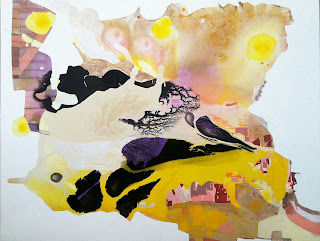 New painting:18 x 24, acrylic on linen. Images and pours intersect as emblems of full and empty space. In this painting memories of places and their media images yield a mode of realization dictated through touch, whereas my physical presence in a particular place might inspire a more direct, even literal image. This re-enacts Chinese ideals that studio painting synthezes internal and external sensations, as a studio art. But whether in the landscape or observing it through projections and photographs, the idea is to move through painting, fusing image and gesture in the glances of passersby.
Posted by ec at 10:56 AM 1 comment:

Welcome to I-Hsiung Hu's instruction on the Four Gentlemen (bamboo, orchid, chrysanthemum and plum blossom). These idioms introduce the texture strokes that define Chinese landscape, and in so doing, provide elements of calligraphy and stroke order. I'm using I-Hsiung Ju's quartet of instruction manuals, purchased in a 2007 visit to his studio. The Four Gentlemen are dorky, but they are also fun and I am glad to have the thorough, step by step instructions and cultural background for the idioms that I-Hsiung Hu's books provide.

To copy the idioms and memorize the stroke orders is to immerse into a silent conversation with Professor Ju. He issues admonishing "don'ts!"to accompany images that transgress proper application. He wants to redirect focus from crossed branches, awkward downward facing flowers or rigid vertical compositions to alteration of placement, tone and mark. This requires much pre-planning: leaving space on branches to allow one to cross in front, be sure that heavy elements rise to weightlessness with the size and emphasis of the brush, or balance the ink load between dark and light, dilute and dry. The principle of alternity expands within landscape composition, deploying open/closed or host/guest relationships within a balance of empty and full. Way more conservative than the free-wheeling literati whose paintings continue to amaze and delight, Professor Ju nonetheless bestows readers, at least this one, the ability to 'read' Chinese paintings with knowledge. Our conversation is studded with exclamations (I wiped out! Stop saying don't!) and dawning recognition of previously hidden points, such as the distinction between composing and performing, which become philosophically profound.

Luo Ping, whose work was exhibited in “Eccentric Visions: The Worlds of Luo Ping (1733–1799)” at the Met in 2009, took plum to unprecedented levels of expression. Profusions of blossoms drip from flowing branches, rather than the minimal flower arrangements on jagged trunks Professor Ju instructs should be "ugly, pale and awkward." For Luo Ping's family, plum painting was their livelihood. Below, one observes an active shift from the performance role of execution to the composer role of innovator. Within the embodied process of painting, the two fuse together in seamless delight. 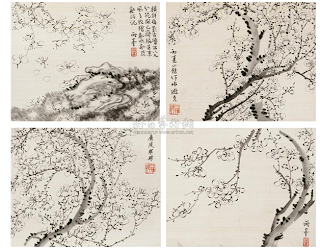