The Way We See 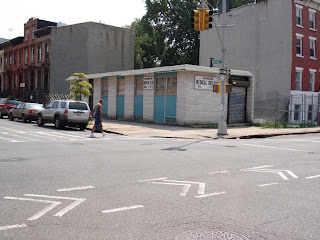 Walking through my neighborhood, I fix on particular landmarks. The Franklin Medical Building, above, is one of my favorites for its mid-century design, compact scale, aqua panels and dated signage. Once likely a hub of activity, now slatted blinds hang loosely in the windows; the roll up remains locked.  I wonder what happened to the doctors who practiced there; who owns the building now, and its role in the neighborhood before closing. Often in my neighborhood, space assumes the linear shape of avenues lined by brownstones, undifferentiated in memory.

The article Culture Wires the Brain: A Cognitive Neuroscience Perspective, cited on Integral Options Cafe (http://integral-options.blogspot.com/ on 8/6/2010), proposes a singling of landmarks as cultural:

..."There is evidence that the collectivist nature of East Asian cultures versus individualistic Western cultures affects both brain and behavior. East Asians tend to process information in a global manner whereas Westerners tend to focus on individual objects. There are differences between East Asians and Westerners with respect to attention, categorization, and reasoning. For example, in one study, after viewing pictures of fish swimming, Japanese volunteers were more likely to remember contextual details of the image than were American volunteers. Experiments tracking participants' eye movements revealed that Westerners spend more time looking at focal objects while Chinese volunteers look more at the background.

...Park and Huang note that, "with age, both cultures would move towards a more balanced representation of self and others, leading Westerners to become less oriented to self and East Asians to conceivably become more self-focused."

The holistic perception in Chinese scrolls initially attracted me for the dissolution of binaries. In scrolls, space undulates with a "butterfly" perspective that shifts from length to depth. This leads me to reconsider drawing now, how parts fit into the whole by working from the whole at first. Same with my neighborhood, as it undergoes gradual but persistent gentrification.
Posted by ec at 3:15 PM