The 70s in LA can be hard to explain, but this film comes as close as anything. First 15 minutes. This image is from later in the film, when he talks about different personas setting people free. 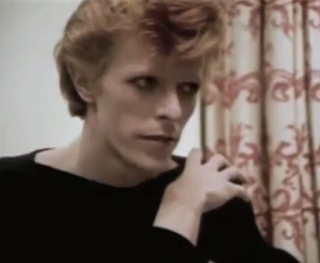 Clipped text:
"Alan Yentob's incredible documentary made for the BBC in 1974, which Nicolas Roeg saw and took the car scenes for The Man Who Fell to Earth. This documentary changed the way rock docs were made - before this they were chronological, linear, and this film was modeled after the mercurial nature of its subject, David Bowie."