Anne Swartz has been documenting With Pleasure: Pattern and Decoration in American Art 1972-1985" at MOCA Grand St., LA, on her Facebook page. After its LA run, the survey exhibition travels to Hessel Museum of Art at Bard College in June 2020 to assuage eager East Coasters. Anne Swartz kindly granted permission to share her posts on individual artists in the show, which document thoughts and ideas she wants to store or develop. There will be subsequent posts as her feed continues. Her direct feed is here:  Anne Swartz Facebook Feed

We begin with Swartz's most recent post on this exhibition featuring Dee Shapiro's Rotunda I, 1980, about which Swartz observes, "This intricate painting shows the artist’s intense investigation with patterning, influenced by mathematics, nature, and weaving. Her method involves extreme precision. She was connected to Pattern Painting and to the Criss-Cross Collective, as well as being centrally involved in NY Feminist Art activity of the 1970s. Her work deserves more widespread attention and recognition."


And here I quote Robert Zakanitch, “what a great painting that is!” Vivacious composition and fun colors, beautiful rendering and immediately appealing scenario, this painting takes you from the large, sweet faces of the faeries poking out around the flora, down to the playful little pom-poms along the edge. It’s unexpected and thoroughly entrancing. Robert Kushner, Faeries, 1980 in “With Pleasure: Pattern and Decoration in American Art 1972-1985”.

What a fresh face! Like Miami Art Deco meets domestic textiles, such a great painting. Robert Zakanitch, Angel Feet, 1978 in “With Pleasure: Pattern and Decoration in American Art 1972-1985”.

The seeming endless variety of stitches are like decorative friezes or bands. Up at @moca is Jane Kaufman’s Embroidered, Beaded Crazy Quilt of 1983-85 and on the cover of the “With Pleasure: Pattern and Decoration in American Art 1972-1985”. Jane Kaufman, like all the P&D artists, was heavily influenced by past examples of quilts (among other forms) and wanted to honor those traditions. Jane was heavily involved in 1970s-90s NY feminist art activity, which informed her practice. At its center, the oeuvre recalls anonymous women's work. Quilts became the hot commodity with feminism, but also remember the Whitney had the Abstract Design in American Quilts show in 1972, signaling a shift in the recognition of craft practices, which P&D artists wanted. Marcia Tucker included this quilt as a bed covering in her 1996 Labor of Love show at the New Museum. It's difficult to see examples of Kaufman's work, unfortunately. She made screens out of peacock feathers (an ode to Victoriana, esp Whistler's Peacock Room, a major influence on several of the artists) and pearls (an example of her tribute to and love of Rene Lalique).

Joyce Kozloff, Striped Cathedral, 1977, 72 x 180 inches (skewed angle b/c too many people in the gallery) Here’s the idea of travel as an image and painted manifestation of progressing in space. Special opportunity to see this painting in “With Pleasure: Pattern and Decoration in American Art 1972-1985”.

Miriam Schapiro, detail of the Seraglio In Miriam Schapiro with Sherry Brody, The Dollhouse, 1972, originally installed in Womanhouse, only surviving part of temporary installation by Miriam Schapiro, @judy.chicago, and their students at the CalArts Feminist Art Program on exhibit in @annanotana “With Pleasure: Pattern and Decoration in American Art 1972-85”. Glad it is in the show, signals this movement originated in Feminist Art. Pastiche and appropriation as a way to connect to the greater world at a time when that was verboten. 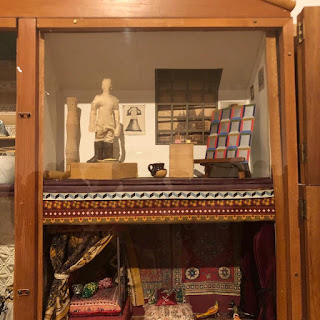 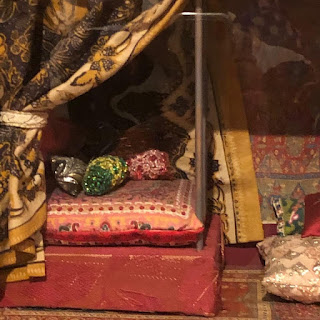 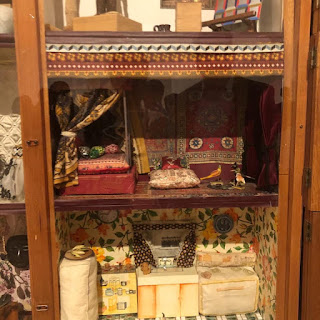 In “With Pleasure: Pattern and Decoration in American Art 1975-1985,” Brad Davis’s Rabbit + Two Dogs = Desire of 1979, Top of the Peak of 1980, and Bird & Lotus Tondo #4 of 1979 showcase his spirited meditation on Persian miniatures and Chinese painting, esp ceramics. He was combining many sources but one in particular is fascinating, Shahnama (The Book of Kings) since across the street from @moca @thebroadmuseum has @shirin__neshat series which include her use of the text and image in her photographs (her copy is on view). I can’t look at his paintings now without seeing Pierre Bonnard. He told me how he and his wife @janisprovisor (the renowned painter) went to the Tate show last spring and just stood before canvases asking “how did he do that?” They would look separately and together, marveling at his colors and compositions. This exhibition will prompt many artists to think about figuration in concert with ornament and decoration.


Inspired inclusion by @annanotana of Sylvia Sleigh’s Turkish Bath of 1973 in “With Pleasure: Pattern and Decoration 1972-1985”. There because the cast of characters includes Lawrence Alloway, (reclining in the foreground), the artist’s husband and a critic and curator; John Perrault (center seated with beard), who curated and wrote about P&D back in the day; Carter Ratliff (seated in back), who also wrote about P&D and ornament during the era; and Scott Burton kneeling. Parenthetically “embracing” the composition, she included the double portrait of one of her favorite models, Paul Rosano. Several things drew me into its presence in the show: how it points at the romanticism and sentimentality in P&D’s revisionism; the revision of her historical source, Ingres’s Turkish Bath, 1862, with male subjects to show she could take on art history; as a corollary to all the other redefinitions of Art History in P&D; her love of patterning and all the ways she employed it; the pleasureful aspects, esp her love of showcasing the nude (she loved Playgirl for poses); the visual culture of the era, like the textiles and interior; and her devotion to her Pre-Raphaelite sources for their colors, subjects, and surface activity. Much to think about there.

Another reason to go see “With Pleasure: Pattern and Decoration in American Art 1972-1985” are @smythned sculptures and the way he created such intense contrast between the decorative mosaics and the smooth architectonic bases. These photos do not do the pieces justice. Based on his life going back and forth to Italy, the son of an important Renaissance art historian, he mixed Ancient and Byzantine surfaces, and more. The next image is “The Garden,” his sculptural 1977 collaborative with @bradleyddavis (paintings)—a contemporary take on the pleasure garden. Speaks to Holly Solomon’s support for the movement (it was in her gallery). I also include images of The Upper Room, 1987 in Battery Park City with the detail of the Tree of Life centerpiece there to show one example of his public art and where some of these shapes, surfaces, and forms would culminate.


Thank you, Anne Swartz, for the selection and overview of the Pattern and Decoration artists at MOCA LA and in June 2020 Bard's Hessel Museum in "With Pleasure: Pattern and Decoration in American Art 1972-1985". Pattern and Decoration was a major movement when I came of age at UCLA, and resonates more than ever now with the feminist underpinnings you point out, as well as its collaborative emphasis, global inspiration, and reconsideration of timeless structures.

I saw this show in LA and am so stoked to see it again in a few weeks at Bard! Thanks for this post.