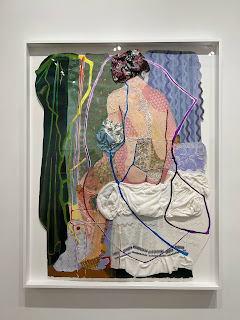 Dee Shapiro's recent exhibition of new work (2019-current) at David Richards. In lieu of the boilerplate bio, she ruminates on her origins and formative artistic inspirations. It's fascinating to read her and to see her new work. From my own wallpaper paintings of 2016-2017, I feel kinship with her desire to rework borrowed imagery, by now part of a shared visual lexicon, and the pleasure she takes in re-imagining the scenarios anew. 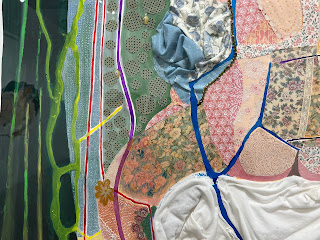 Streaks of paint determine points of demarcation in Shapiro's figures, which she patterns around.
"When I was four, my mother taught me to knit. I was intrigued with the counting and the patterns that developed. In retrospect it was a great influence on my choice of subject in my work. As I got older, I was attracted to numbers, math and puzzles. Again, I had no idea that my future would include anything related to those interests." Shapiro's work in With Pleasure: Pattern and Decoration in Art at LACMA and Hessel showed tightly layered and densely colored lines in a grid-like weave and tondo format - photo on link by Anne Swartz. 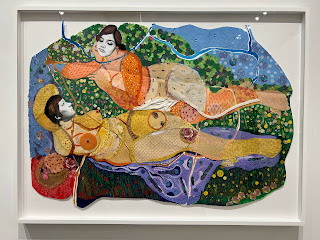 "In my spare time, I drew and seemed to be good at it. In elementary school, I won the art award. That was a confirmation for me that I could take it more seriously and so I studied art at Queens College. A semester in Mexico, studying art, further shaped my interest in pattern." 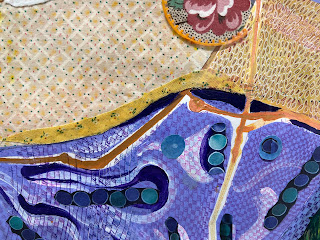 "The Albers Color Course was instrumental in my involvement with colors. And the work in the show is often mistaken for weaving and people like the surprise to find it is paint." 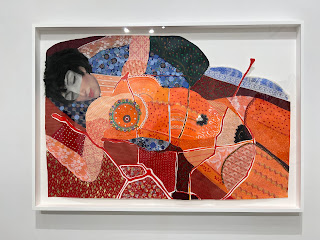 "I am a feminist and much of my work is identified with feminism in that the work is often associated with female sources or influences. [Shapiro is a member of Women Writing Women’s Lives and the National Museum of Women in the Arts.]I don’t notice a shift in my practice but there has been a societal change among feminists since the beginning of the Women’s Movement." I relish her unabashed interest in these themes and her incorporation of collage into the brilliant hues of her large works. 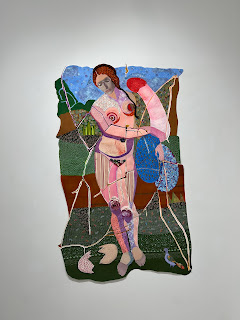 "Pattern and decoration relates to the once pejorative of ‘decoration’ associated with craft or low art. The Pattern and Decoration movement elevated ‘decorative’ to high art. All art is decorative, is it not?" Shapiro asks. I love the pieced-together methodology she uses as well, a natural and informal way to work. 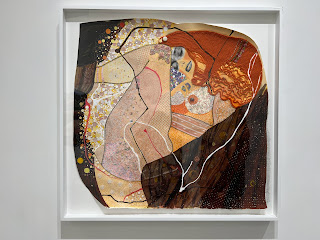 "Systemic painting means simply that one uses a system to make the work. It can be numbers or symbols or anything that is repetitive and organized. The best of it demands figuring it out as well as providing a visual delight.

Pattern can be systematic or not, but often is repetitive. My experience as a textile designer taught me about the repeats of an initial image, thus creating a pattern." 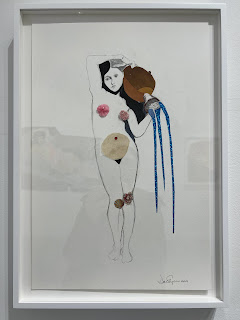 A beautiful drawing, cited from sources like the paintings are. I was thrilled to discover like me at age ten, Shapiro found formative inspiration in Stella's Protractor series! She states, "One major influence that I can remember was seeing the Protractor Series by Frank Stella in the late ‘60’s. By then I had two children and had been teaching since graduation. It was the geometric and decorative qualities that really knocked me out. My work up to then was mark making, somewhat minimal, yet patterns seemed to develop in some mysterious way."
Posted by ec at 10:04 AM