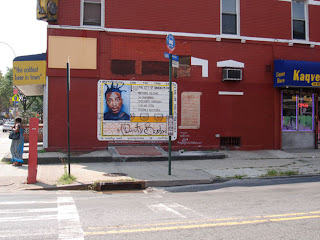 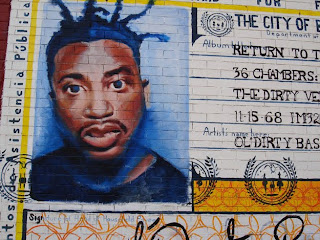 Two blocks away from where I live, this mural has become an integral part of my daily landscape.  Ol' Dirty Bastard's visage conjures wonderful memories of late night printmaking binges on a week-long workshop at Texas State University, San Marcos with Jeffrey Dell in 2005. As industrious students and Dell pulled screens into the night, the Wu-Tang Clan with ODB at the mike yodelled us on. I often stop and stare at the eyes in this mural, which brilliant blue unnaturally obliterates the pupils so the eyes float out a bit. The blue suggests a camera flash, offsetting the grim, overall illumination of  institutional photography suggested by the image.

The mural, originally painted by Victor Goldfeld in 2007, has been defaced and repainted twice. For more history and a UTube synopsis, check Goldfeld's site, linked above. For more background you can find an interview with Giacomo Fortunato and Vega on the blog TheCrypt; Fortunato wrote an essay for the online magazine Heeb, Ol' Dirty Lawsuit, in 2009.
Posted by ec at 9:57 AM