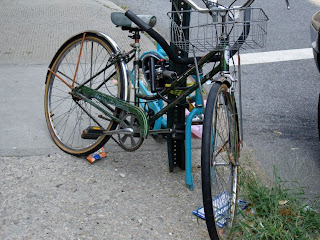 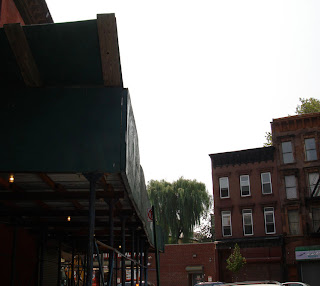 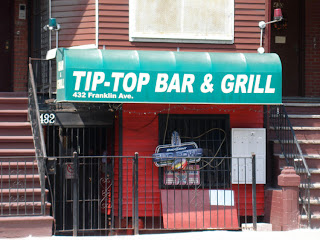 As summer wanes, these images conjure the imaginary relief from heat on concrete experienced on sweaty tromps through the neighborhood. One thing that stands out overall is how alcohol-related businesses beckon customers with nostalgic touches of days gone by. An example is the Tip-Top Bar + Grill, which comes alive at nights when its signage alights. Red and green lights -- hybrid lantern and subway stop globe shapes-- twirl above the entrance; when lit, the beer sign allures as a pirate chest would. Such touches make the mundane magical, as do the cardboard displays in liquor store windows that juxtapose faded, corrugated cardboard backdrops with images of cruise ships and martinis.

Beyond my front door heading to Fulton Street (I'm three doors in) is the unused construction shed that surrounds a building with wood-covered windows. No construction in sight. This same building was where the Claver Place Mens Club used to be. At night, the neighborhood men would gather (with some guest women on occasion) to play pool, drink beer and congregate under low-hanging lamps. Now, homeless folk argue and sometimes sleep under the construction shed.  I miss the men with the aviator glasses, who pulled up chairs outside of the club and chatted in the late afternooons before heading in to their pool game.

I often look at the willow above Family Dollar and wonder where it grows from - an empty lot? Someone's back yard? It reminds me of Chinese scrolls that have been suddenly transported to another time and place.
Posted by ec at 8:35 AM